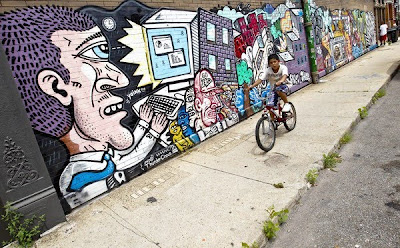 Long before Comiskey Park became the Cell, even before there was a new Comiskey Park, two brothers emigrated from China to a Near South Side neighborhood called Bridgeport. They lived on the North Side for the first few months, right on the lake, but they were grand-scale visual artists and needed enough space for a large studio. Not to mention, as non-English speakers, they wanted to be close to Chinatown. Bridgeport was the most logical choice, geographically and economically: It was located within close proximity of native Chinese speakers (and food), and its abandoned warehouses were practically a steal. It was 1987, and the brothers had found their home away from home.

More than 20 years later, Realtors have learned to sell Bridgeport based on its two most significant residents, past and present: Mayor Richard M. Daley and the Zhou brothers.

"We were the first artists in the neighborhood," says DaHuang Zhou (pronounced "joe"), the younger of the two. He's sipping an iced coffee prepared by one of his employees at a cafe in a large art center, both of which bear his name. "We wanted to create a special stage for artists. This was our only dream for a long time."

DaHuang and ShanZuo Zhou's dream came true in 2004, when the brothers purchased an enormous 84,000-square-foot warehouse building on 35th Street and built the Zhou B. Art Center. It houses two vast exhibition spaces, multiple galleries, the cafe, a gift shop and offices. It's the epicenter of their empire, built over two decades.

On the day I meet DaHuang Zhou, I ask him how many lots he and his brother own in the neighborhood. He paused before answering, as if counting in his head. "Nine," he says finally, borrowing my pen to outline little squares on a piece of paper marked with an upside-down T, representing 35th and Morgan streets. He drew a box for the Zhou B. Art Center on 35th, and in the middle of Morgan another to indicate their studio. Another square marked the residential building in which visiting artists are housed. He outlined a lot for the sculpture garden they designed and built in 1997, and next to that the Zhou brothers Art Foundation, established in 1991.

The Zhou brothers, of course, are just two residents in this slowly burgeoning neighborhood.

Slow is the typical pace in Bridgeport. Nestled in a pleasantly low-traffic wedge of the Near South Side (bordered to the west and north by the Chicago River, to the south by Pershing Road and to the east by railroad tracks), it's quietly residential with more than adequate amenities. It is increasingly becoming one of the most ethnically diverse neighborhoods in the city, yet maintains its Irish Catholic pride and long history of political residents, including five Chicago mayors.

Daley moved out in 1993. But artists have moved in.

Down the street from the Zhou B. Art Center is the newly christened Bridgeport Art Center, known until a handful of months ago as the Artists of Eastbank. Building manager Drago Batar changed the name of his 10-year-old business, located in the former Spiegel catalog warehouse, to reflect its transition to a multidisciplinary building. Painting, drawing and sculpture artists — about 45 of them — have populated the lofty warehouse for years. Batar says the number of photographers is increasing, and in the next few months he plans to lure ceramicists with a brand brand-new clay center on the sixth floor, awash in natural light from the sea of skylights.

Batar says the local artists' community used to be centered in Pilsen, a mile northwest across the expressway. Not anymore. "Five or six years ago, (the community) started shifting to Bridgeport," Batar says. "Pilsen's real estate prices went up, and more artists started coming here."

And why not? The art is the icing.

A modest collection of cafes and historically rooted restaurants are there, including Polo Cafe and Catering, which has occupied a Morgan Street four-flat for a quarter-century. Chef-owner-innkeeper Dave Samber is quick to name-drop the Zhou brothers when quizzed about the locals. But his patrons are mostly suits and families. A chalkboard in the foyer, featuring drawings by artist and former neighbor Jacqueline A. Harrison, features detailed mayoral portraits, including Richard M. Daley — who used to live within walking distance. Samber keeps a piece of chalk with his name on it (literally) to score a signature when the time comes.

Up the street, the neighborhood's next generation of artists down dark Guatemalan brews at Bridgeport Coffee, which hosts live jazz as enjoyable as its BLTA (bacon-lettuce-tomato-avocado) wrap. A few doors down is Co-Prosperity Sphere, an independent alternative cultural center opened in 2008 by longtime local art enthusiast Ed Marszewski as a bricks-and-mortar home to his various endeavors. He bought the building, junk piles and all, from a guy he met at his mother's bar, Kaplan's, up the street. The lofty space now holds frequently rotating art shows, storefront installations and the offices for Marszewski and his wife's nonprofit, Public Media Institute, which produces a half-dozen art-centric publications and programs annually.

Marszewski, like the Zhou brothers, embraces the neighborhood's opportunity. Later this month, he and his brother will re-open Kaplan's as Maria's, in honor of his mother, with a beverage program and potential for more. Meanwhile, he frequents the decades-old, buzzed-in-entry Bernice's Tavern (established 1965, as the sign boasts). It shares a strip of Halsted Street with crate-digging destination Let's Boogie, which continues to stock new (not used) vinyl and tapes, despite the shrinking market; and organic eatery Nana, whose successfully eclectic brunch (chilaquiles, house-made granola, bacon hash) prompted last month's expansion to dinner.

The best place to contemplate all that Bridgeport has to offer is one of the oldest: McGuane Park, which has been in the neighborhood for 105 years. Perched from the lofty hill above Halsted and 29th streets, you can see the whole neighborhood. And it's quite a view.